By using www.dynafit.com/en-us, you agree to SALEWA North America's Term of Use and Privacy Policy. I Agree

Imagine moving 130.5 miles and 10,500 meters of climb across the Alps without sleep or long breaks. On his “Speed Transalp Non-stop”, speed mountaineer Benedikt Böhm did just this, while putting his trust in the new DYNAFIT Pintech System - the ultralight P49 race binding and the corresponding DNA Pintech by Pierre Gignoux racing boot. What is truly revolutionary about the package is not only the binding’s minimal weight of 49 grams, but also the interplay between the binding and boot. Instead of the two-sided pins on the toe piece of the binding and the corresponding inserts on the ski touring boot, the Pintech’s spring-loaded pins are directly set onto the boots toe. The benefit of the new concept - stepping into the binding is significantly easier, more comfortable and faster. At the same time, this has also allowed the binding’s weight to be greatly reduced. But, would the new system be able to succeed when it was put to the ultimate test? Contine reading on to find out whether or not it did!

When challenging yourself physically and mentally right up to your very limits, you must be able to rely 100% on your equipment. With that being said, you would typically turn to gear with which you have already had good experience with and have spent a lot of time using. Who would wear a pair of shoes for a marathon that have not been worn even one time prior?

On challenging tours, you'd normally turn to the equipment that you know..

My “Speed Transalp Non-stop” was a very spontaneous project as winter 2019 was a good one. I was training well, and I simply had the desire to do something that would push me to my limits. Our new Pintech Race Binding P49 was new to the market for the 2018-19 season and was used by our athletes for the first ski mountaineering races. The system had passed tests with flying colors and demonstrated all of its practical benefits during the competitions. As managing director, I was involved in the development process with our binding engineers and over the last four years, our idea came to fruition, bit by bit. As a part of that, I had also of course tested the binding and the first prototypes on my own tours. So this binding wasn’t totally new to me, but I’d never used it on a longer tour. I did know that I absolutely wanted to do my Speed Transalp with the new Pintech System. I knew I didn’t want to spend more than 36 hours for my Alpine crossing and I knew that in order to conserve the most possible energy along the way, my gear had to be as light as possible. The solution - the Pintech System, which had turned the world of ski mountaineering upside down.

How can one further increase the speed and comfort of stepping into the frameless pin binding while at the same time noticeably decrease the weight? This was the biggest challenge our team worked on during the development of this binding concept for skimo racing. During the process it became clear quickly: The potential for further improvement on the current Low Tech Race binding was in this regard maxed out.  Thus, our engineers had to design a totally new system – thinking completely “out of the box” with a different approach. The result was the new Pintech System in which the proven interaction of pins and inserts has been reversed. Instead of two-sided pins on the toe piece of the binding with the corresponding inserts on the ski touring boot, the Pintech’s spring-loaded pins are directly set onto the boot toe. With its unbelievably low weight of 49 grams, the P49 binding thus weighs less than half of a chocolate bar.

The P49 weighs half as much as a key chain or smartphone.

To enter the bindings at the front, a racer simply steps down with the boot toe and the system immediately clicks in and also displaces any snow and ice in the process. Generous guidance grooves enable easy and comfortable entry even on a steep slope or on very uneven terrain. A plate insert is attached at the heel area of the DNA Pintech boot, which allows the boot to click solidly into the heel unit with one firm step. One unique selling point of the new system is the transition from downhill to a climb, which represents a time-critical component in skimo racing. As prescribed by ISMF guidelines, the binding releases vertically (release value 6-7) and laterally (release value 8-9) and can in addition be totally locked using the levers on the sides. It just takes a simple one-handed motion to move the toe pieces together and at the same time the levers down so you can step out of the binding for attaching skins. What makes this especially convenient is that the ski is then in the racer’s hands, allowing speedy transitions to skins. Ski back on the ground, click into the front – and in just a few seconds, off you go again uphill in race mode. At least that was the theory.

Even though I have complete trust in the work of our engineers, I was still slightly nervous about the new gear, which I had not actually used for such a long period of time – particularly in tackling such a mammoth project as the Speed Transalp Non-Stop. In addition to the extended time I was going to spend on the bindings, the weather forecast didn’t look promising. Questions and concerns started taking over my mind - What would happen if the binding under full edge pressure on an icy piste releases? What if one of the levers on the sides break and the binding is locked shut? I knew I had to put these questions aside and put my trust in the gear. Luckily, my “experiment” with the new Pintech System paid off rather quickly and my initial skepticism flew out the window in the shortest time.

Will the binding hold up downhill at full throttle on an icy piste? Sure hope so!

In the 28 hours and 45 minutes of my Speed Transalp with its 210K and 10,500 meters of climbing, I was able to put the Pintech System to the acid test. And I was not for a moment disappointed. Once adjusted and accustomed to it, the entry was quick and easy. You simply step in and down with the toe of the boot, lock the binding, and you’re off. Same goes for the descent. Step in and push down strongly with the heel, and you’re immediately safely and securely in the binding. The binding locks down automatically. Opening the binding using the levers on the sides of the toe piece takes a little while to get used to, because if you’re like me I’ve been locking the binding using a lever on the toe piece for the past 20 years. But that too you manage quickly and can internalize the new handling. It’s especially practical that you have the ski right in your hand when you transition from the downhill back to a climb. In the end, you have to have the ski in your hand to attach skins. Like on the Speed Transalp if you have to attach and take off your skins more than 20 times, this then is really comfortable and saves time. But of course that’s not the only advantage of the new binding. Its weight of 49 grams is simply unbeatable. Together with the DNA Ski and the DNA Pintech boot, you have an unbelievably light setup with which you can move along extremely quickly. Its minimal weight however in no way is at the cost of safety or durability of the binding.

The Speed Transalp was the ultimate test for the Pintech System.

As I previously mentioned, the conditions for this project were far from ideal. We faced it all – from frozen, rock hard pistes to rain to icy crusts, but even on the most brutal downhills, the binding never let me down. If it had released, the results would have been fatal. But I had total trust in the system after just my first downhill. Thoughts of a potential unintended release flew out the window, and I could fully concentrate on the activity and achieve my goal. The new Pintech System played a significant role in allowing me to complete the project in under 29 hours. In fact, the system had impressed me so greatly, that I immediately used it too in the Sellaronda Skimarathon – and achieved a personal best.

Of course, we don’t want to ignore the fact that my positive experience matched results from the lab. Here too the Pintech System was resoundingly impressive. Our engineers were not able to find even the tiniest sign of wear on the binding after my tough test. There’s nothing standing in the way of the next Speed Transalp. 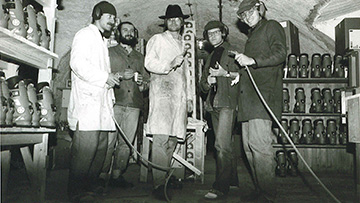 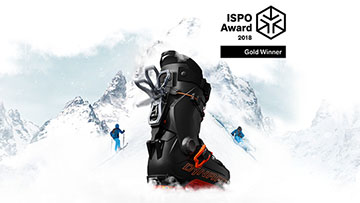 Read more
Get exclusive offers and stories directly to your inbox Sign up for Dynafit newsletters and get articles and weekly updates about products.
*The field is mandatory.